The Next American Farm Bust Is Upon Us

The following article is from Jesse Newman and Patrick McGroarty and originally appeared in the Wall Street Journal.

The Next American Farm Bust Is Upon Us

RANSOM, Kan.—The Farm Belt is hurtling toward a milestone: Soon there will be fewer than two million farms in America for the first time since pioneers moved westward after the Louisiana Purchase.

Across the heartland, a multiyear slump in prices for corn, wheat and other farm commodities brought on by a glut of grain world-wide is pushing many farmers further into debt. Some are shutting down, raising concerns that the next few years could bring the biggest wave of farm closures since the 1980s.

The U.S. share of the global grain market is less than half what it was in the 1970s. American farmers’ incomes will drop 9% in 2017, the Agriculture Department estimates, extending the steepest slide since the Great Depression into a fourth year.

“You keep pinching and pinching and pretty soon there’s nothing left to pinch,” said Craig Scott, a fifth-generation farmer in this Western Kansas town. 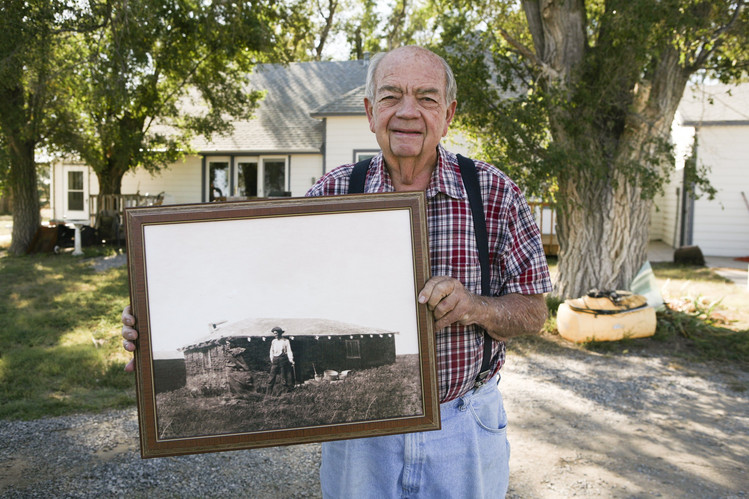 Bill Scott, 82, the father of Craig Scott, holds a photograph of his grandfather, who started the family farm in 1902 in Ransom, Kan.

From his father’s porch, the 56-year-old can see the windswept spot where his great-grandparents’ sod house stood in 1902 when they planted the first of the 1,200 acres on which his family farms alfalfa, sorghum and wheat today. Even after harvesting one of their best wheat crops ever last year, thanks to plentiful rain and a mild winter, Mr. Scott isn’t sure how long they can afford to keep farming that ground.

Costs for seeds, fertilizer and equipment climbed so high and grain prices dropped so low that he still lost more than $120 an acre. Afraid to come up short again, Mr. Scott decided last fall not to plant 170 acres of winter wheat, close to a third of the usual amount. U.S. farmers sowed the fewest acres of winter wheat this season in more than a century.

“No one just grain farms anymore,” said Deb Stout, whose sons Mason and Spencer farm the family’s 2,000 acres in Sterling, Kan., 120 miles east of Ransom. Spencer also works as a mechanic, and Mason is a substitute mailman. “Having a side job seems like the only way to make it work,” she said.

She and her husband have declared bankruptcy before. Farmers around Sterling lost $6,400 on average in 2015, the latest available data, after profits of $80,800 a year earlier, according to the Kansas Farm Management Association.

Farming has always been a boom-and-bust enterprise. Today, the swings are sharper and less predictable now that the farm economy has become more international, with more countries growing food for export as well as for their own populations.

American farmers’ share of the global grain trade has fallen from 65% in the mid-1970s to 30% today, giving them less sway over prices. More producers and more buyers around the world also mean more potential disruptions from bad weather, famine or political crisis.

Corn prices once varied year-to-year by less than $1 a bushel. Since 2006 they have shot up and dropped more than $4 a bushel. 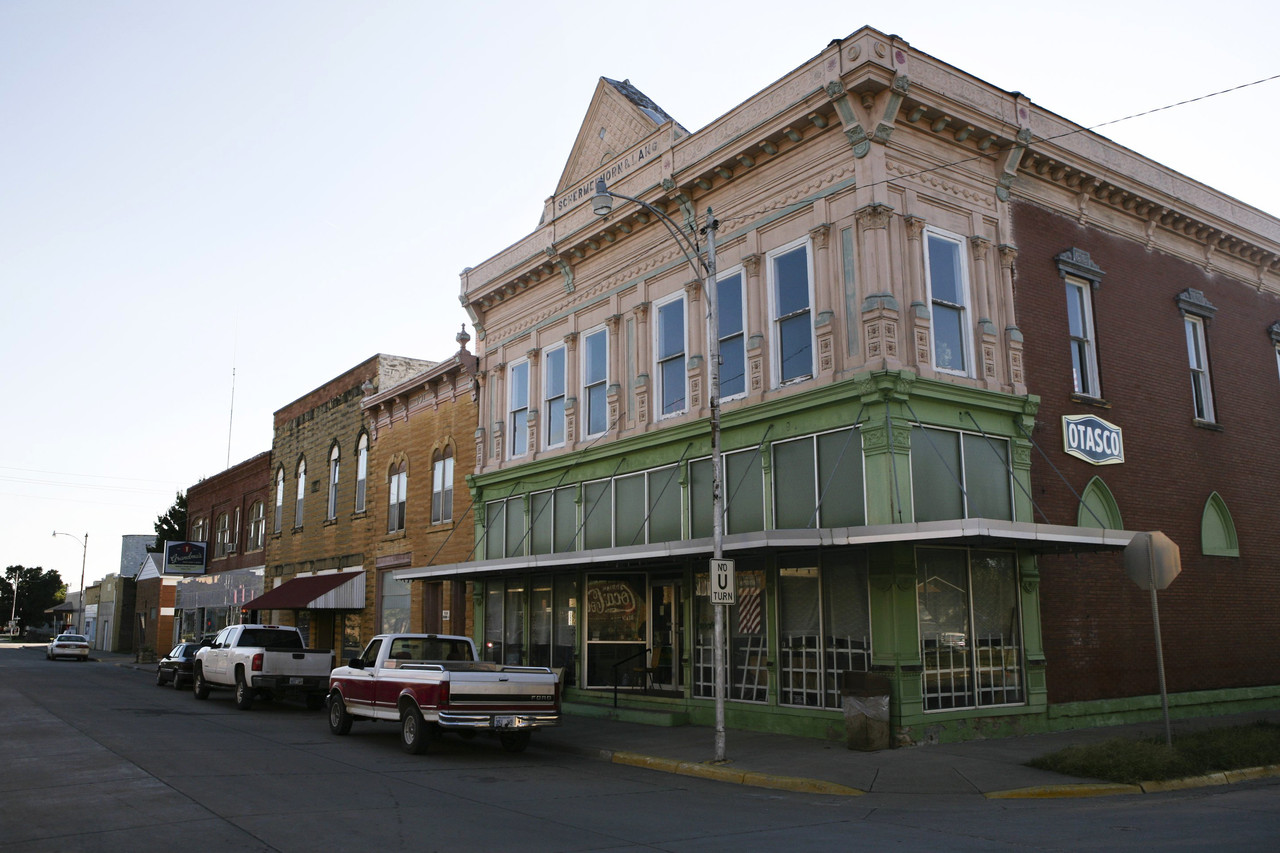 Some farm towns have suffered as low crop prices pressure farmers. Above, Wilson, in Central Kansas.

A decade ago, a U.S. biofuel boom and China’s growing middle class lifted prices for crops like corn and soybeans. Many American growers spent the windfall buying land and half-million-dollar equipment.

The boom also encouraged farmers in other countries to ramp up production. Farmers world-wide put nearly 180 million new acres into cultivation over the past decade. Lower production costs, proximity to fast-growing markets and improving infrastructure gave some overseas farmers an edge.

Corn and wheat output has never been higher, and never has so much grain been bunkered away. 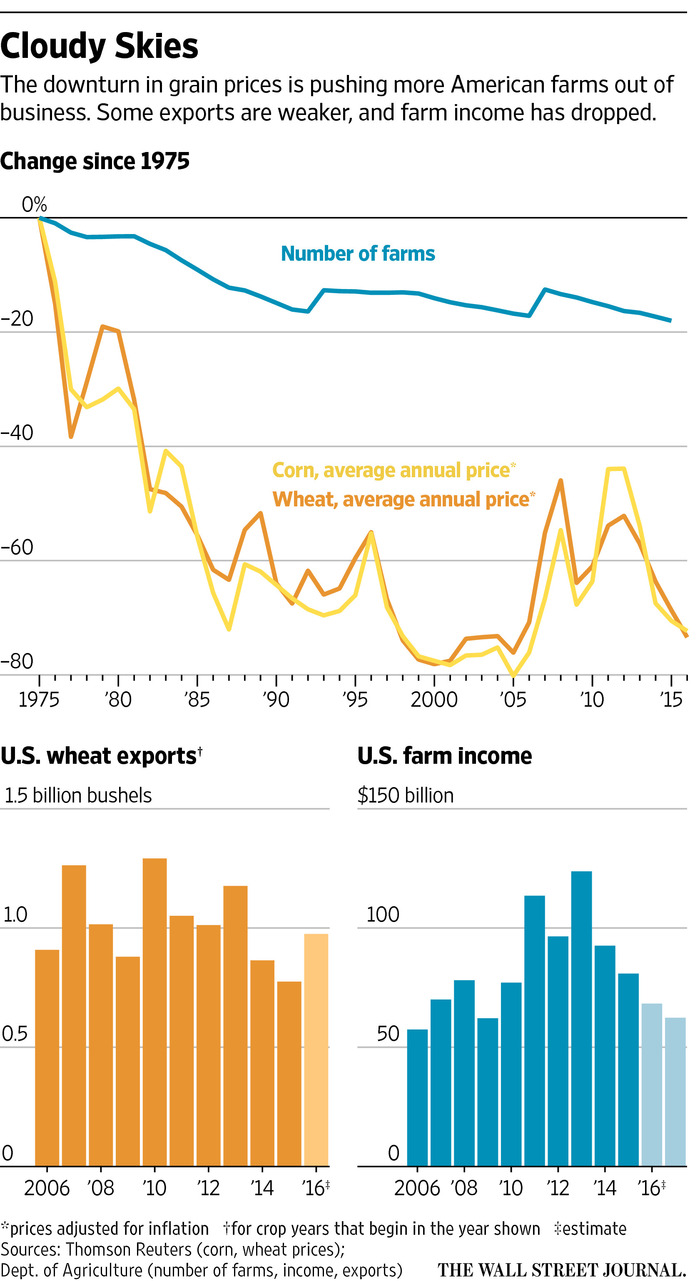 From the early 1800s until the Great Depression, the number of U.S. farms grew steadily as pioneers spread west of the Mississippi River. Families typically raised a mix of crops and livestock on a few hundred acres of land at most. After World War II, high-horsepower tractors and combines enabled farmers to cover more ground. Two decades ago, genetically engineered seeds helped farmers grow more.

Farms grew bigger and more specialized. Large-scale operations now account for half of U.S. agricultural production. Most farms, even some of the biggest, are still run by families.

As farm sizes jumped, their numbers fell, from six million in 1945 to just over two million in 2015, nearing a threshold last seen in the mid-1800s. Total acres farmed in the U.S. have dropped 24% to 912 million acres.

Russia, meanwhile, has swung over the past quarter-century from the world’s largest wheat importer to the biggest exporter, said Dan Basse, president of Chicago-based research firm AgResource Co. Farmers there planted even more wheat last year to take advantage of the U.S. dollar’s recent climb against many currencies. That encourages Russian farmers to export as much wheat as possible for dollars, which convert to about twice the number of rubles they did three years ago.

The strong dollar also allows farmers in some countries to undercut U.S. prices.

“As the dollar stays strong, U.S. farmers don’t have a lever to pull,” Mr. Basse said. “It’s a slow bleed, not a cut to the jugular all at once.” 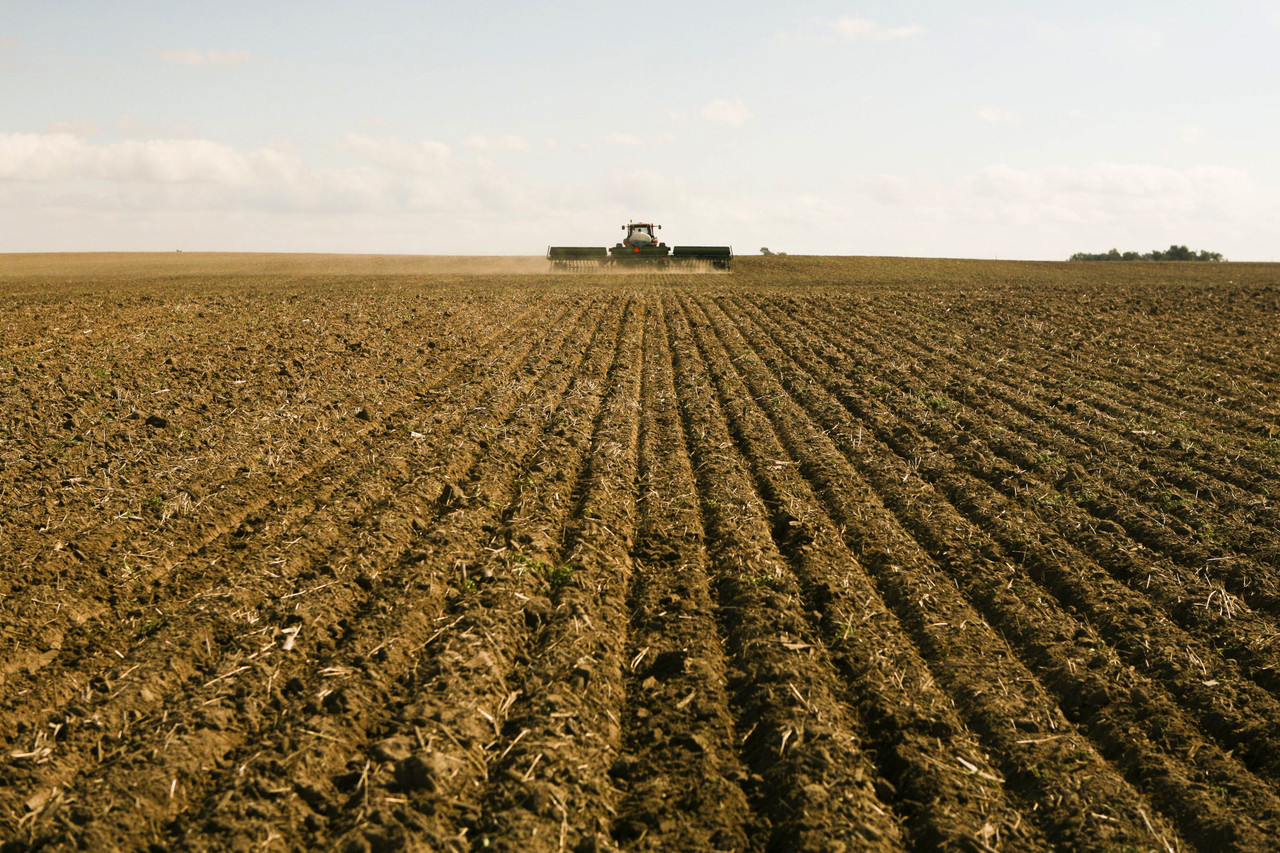 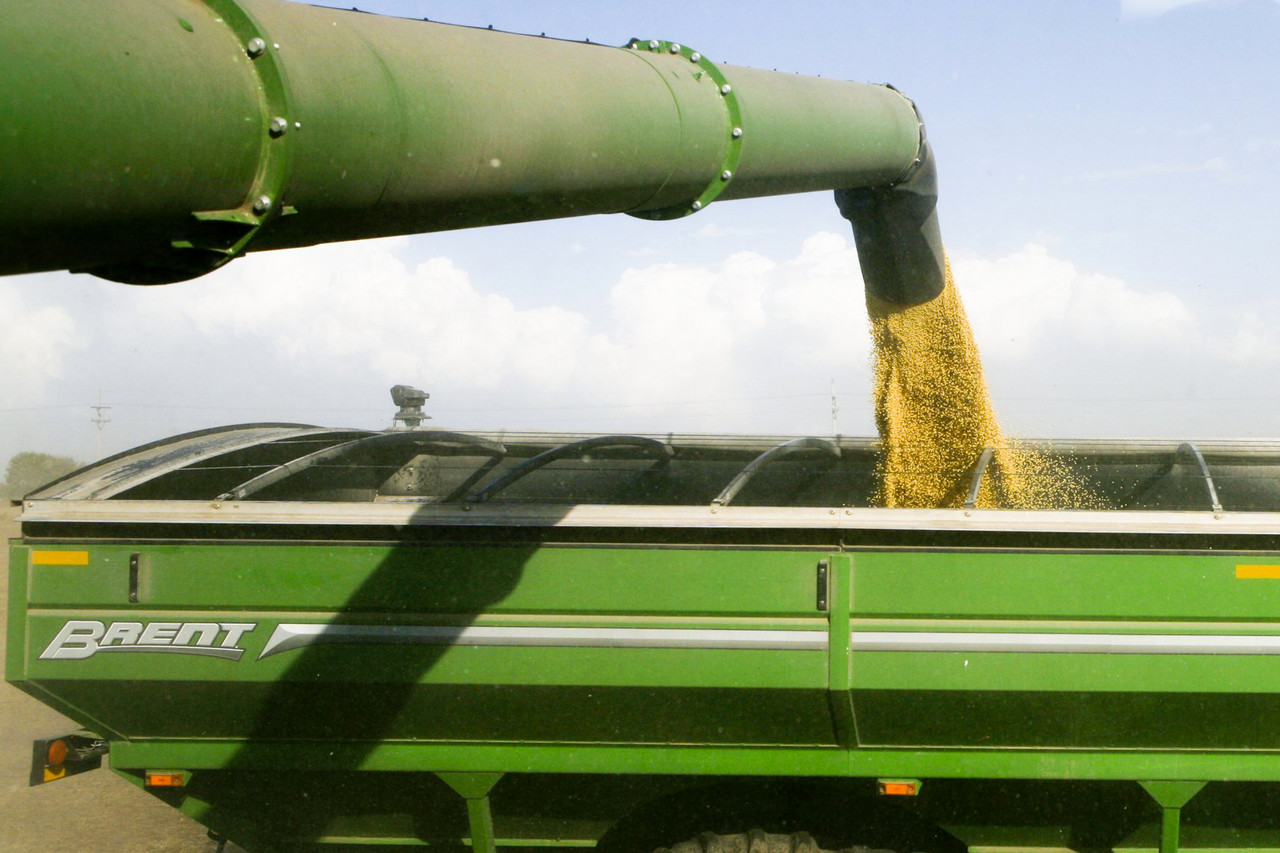 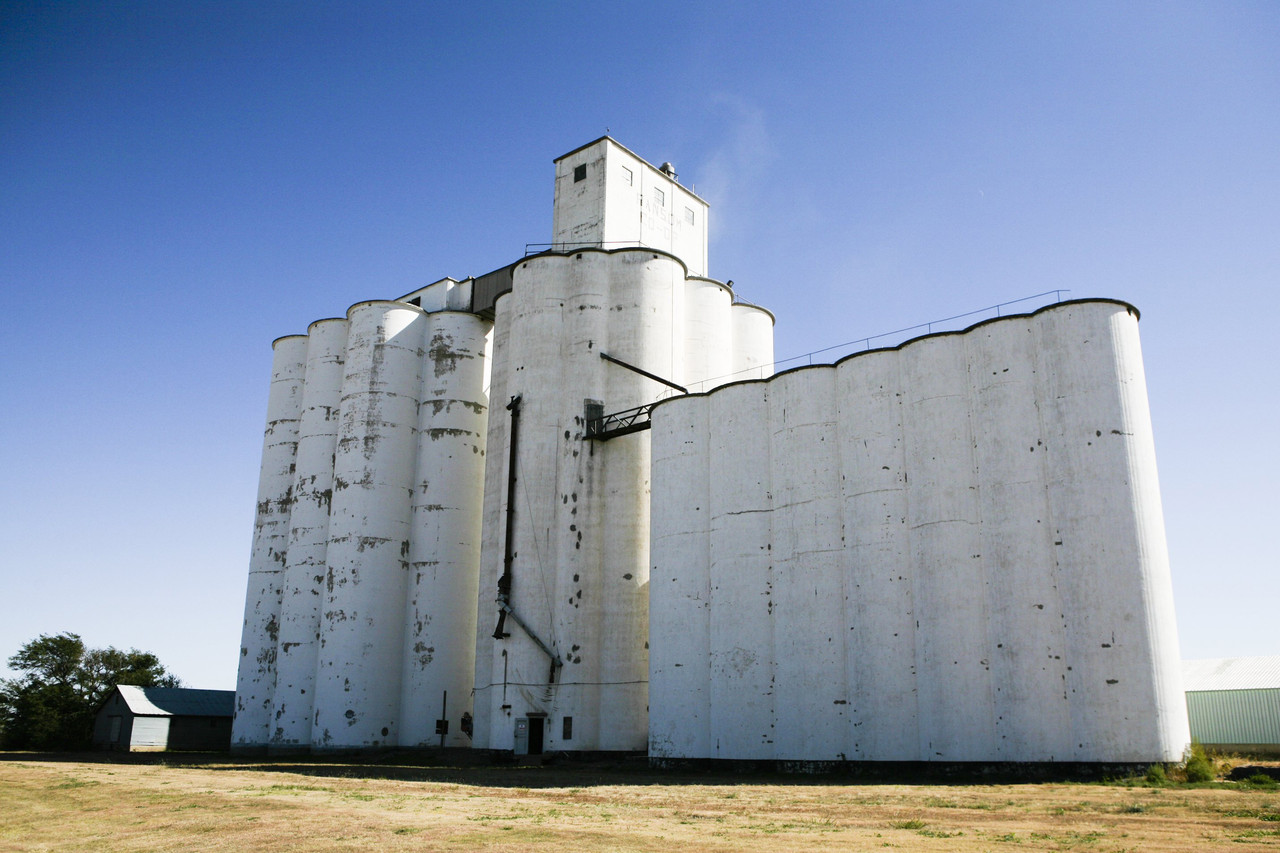 Planting wheat in Chase, Kan.; a soybean harvest in Sterling, Kan.; and a grain elevator in Ransom, Kan.

The Obama administration last year accused China of unfairly subsidizing wheat production and improperly limiting grain imports to the detriment of U.S. farmers. The USDA in October said it would pay more than $7 billion in financial assistance under existing programs to help farmers survive the current downturn.

U.S. wheat exports last season were the lowest in almost a half-century, though government forecasters expect them to improve this year. Mr. Basse said he believes it won’t be economically viable for the U.S. to export wheat within five years.

Economists don’t expect the current slump to be as severe as the crisis that hit the Farm Belt in the 1980s. In those days, grain prices plunged following a rally in the previous decade that spurred farmers to expand production, amassing debt as a surplus grew. Farmland values plummeted and interest rates soared, sparking a bust that forced many farmers and lenders out of business.

Farmland values are expected to hold up better this time. Farm incomes hit record highs as recently as 2013, leaving many growers with significant cash reserves. Interest rates, while expected to rise, are still near record lows. Although debt-to-asset ratios among U.S. farmers are projected to increase in 2017 for the fifth straight year, they also remain historically low. 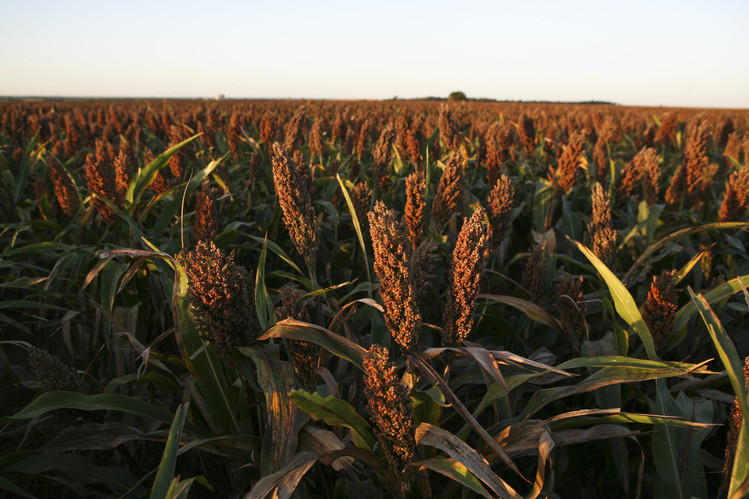 Costs for farm supplies like fertilizer have fallen, and economists foresee increasing pressure on seed prices and land rental rates. The crunch could ease if bad weather curbs harvests, lifting demand for America’s excess grain. Fewer rural communities rely economically on agriculture today, which could help insulate them from the downturn.

For some, the slump is an opportunity. Farmers with low debts and enough scale to profit from last year’s record harvests could be in a position to rent or buy up land from struggling neighbors.

Lee Scheufler, 65, has expanded his farm in Sterling nearly 10-fold over the years, starting with 600 acres four decades ago. Having squirreled away money during profitable years, he recently bought and rented higher-quality land to replace some of his weaker holdings.

“We tried to position ourselves for when the other shoe drops,” said Mr. Scheufler, adding that someday he would like to pass on his land to a younger grower just beginning to farm, like a neighbor did for him.

One chilly afternoon in October, Mr. Scheufler steered his combine across the first field he bought. The machine’s giant claw spun through rows of golden soybeans. A hawk circled the combine’s wake, hunting for exposed field mice. He recalled farmers whose land he has taken over: Ted Hartwick ’s, the Matthews’, the Profits’, his father’s. “Each property has its own history,” he said. 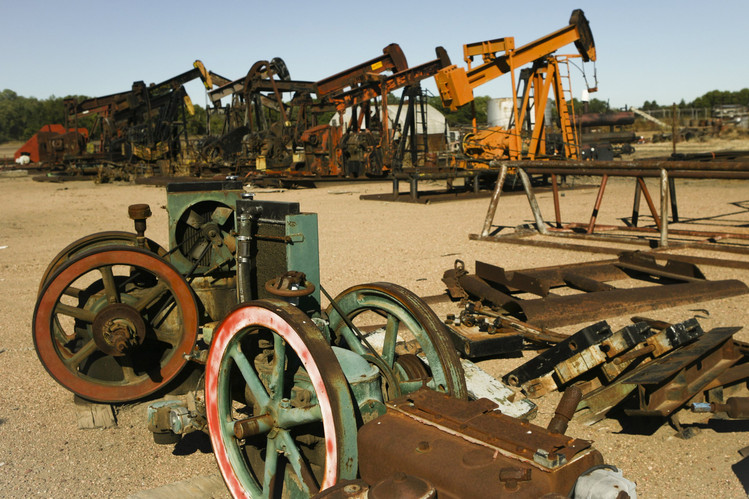 Kansas towns have also been hit by the drop in oil prices since 2014. Above, unused pump jacks and other debris from the oil industry.

In the late 1970s, he joined thousands of farmers in Washington for a demonstration urging the government to address low grain prices and farm foreclosures. As some drove their tractors onto the National Mall, his group rang a bell every five minutes to symbolize the rate at which farms were closing. He has been reminded of those days often this year.

“The potential for a big crisis is real,” he said. “If things stay similar to how they are now, you haven’t seen anything yet.”

In Ransom, Mr. Scott has resorted to government assistance to guarantee himself some income. He placed 170 acres in a government conservation program that pays farmers to plant fields with grass rather than crops. That seemed like his only choice after spending about $6.50 a bushel on seed, fertilizer, fuel and pesticides to grow wheat last year only to earn $2.90 a bushel. During planting season last fall, he and his 82-year-old father cut back on fertilizer and coaxed one more crop out of a 20-year-old chemical sprayer with a worn-out engine.

Many of his peers have given up. There were 28 students in Mr. Scott’s graduating class at Ransom’s high school nearly four decades ago. Most were farmers’ children. This year there are nine students in the school’s senior class. “Farms got bigger to be more efficient, but it’s caused these towns to die a slow death,” Mr. Scott said.

Monty Roth ’s Loaves n’ Fishes cafe was barely profitable last year. He said he might close it this month if sales don’t improve. Oil, the other big business in Ransom, has been battered by the drop in crude prices since late 2014. Most oil workers have left town. 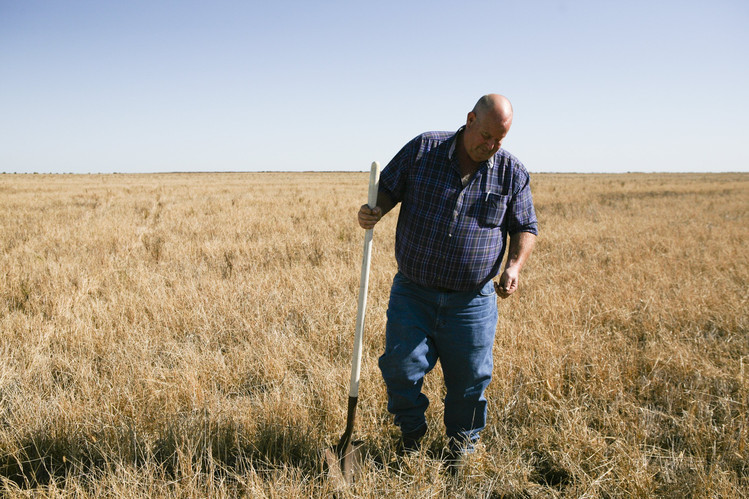 David Radenberg, who has farmed for 30 years in Claflin, Kan., said this crop could be his last if prices remain low.

In Great Bend, 80 miles east of Ransom, Les Hopkins recently sold his John Deere dealership after sales all but stopped. He is owed about $100,000 by farmers who financed machinery purchases they haven’t paid off. He has tried tracking them down by calling from cellphone numbers they won’t recognize. “That money is gone,” he said.

Bankers say many farmers are burning through savings to stay in business. They expect some to retire rather than lose more money. Young farmers without much savings are vulnerable, as are large growers who racked up debt to expand operations. Some locked into multiyear land leases at high rents.

The motor on David Radenberg ’s tractor gave out last fall as he sowed wheat on his family’s 2,400 acre farm in Claflin, 90 miles east of Ransom. He didn’t have the money to fix it.

“You want to cry when you find out how much it costs,” he said. He decided to sell the tractor for $10,500 and rely on an older model. If grain prices remain weak, the farm could be next. After 30 years farming, this crop could be his last: “Do I go work at Wal-Mart as a greeter or as a parts man at the mechanics shop?” 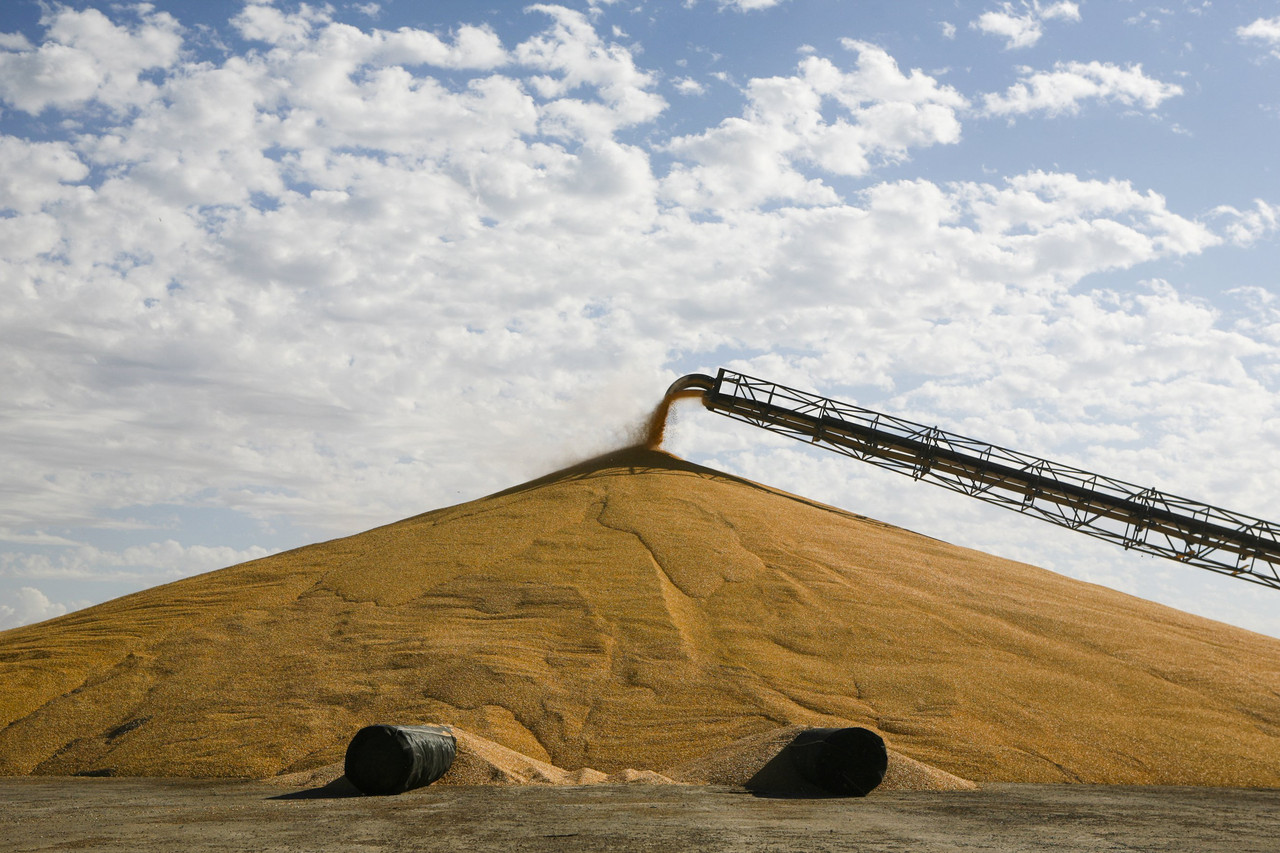